The first step towards domestication is cooking. I have never been a huge fan of cooking. My mother on the other hand used to passionately love cooking and could cook the most delightfully appetizing meals ranging from Chinese to Continental to of course Pakistani. It’s a miracle we weren’t fat kids while growing up, considering the yummy food at home. By the time I was done with my O Levels, mom was beginning to worry why her beloved daughter didn’t share her same passion for cooking. Certain that it was laying dormant under the surface, waiting for a spark to set it off, she enrolled me in cooking class at the age of 15 with one of the best cooking teachers in Lahore. I did enjoy the classes and learned how to make some yummy food, primarily focusing on baking. I tried out the recipes quite a few times at home. My Pizza recipe went viral, and all my cousins came home to learn and copy the recipe. Then my A Levels started, and I drifted away from the kitchen. The benefits of living in Pakistan happens to be that you can get your meals and snacks whenever you want courtesy of the cook, without stepping in the kitchen. So I drifted away from cooking until the fateful day I went abroad for my studies. 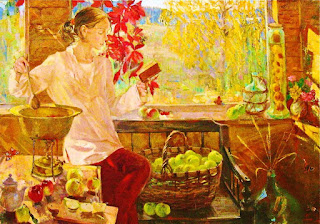 Eating out is fine once in a while. However when you’re on a student budget, it isn’t the most practical option. And it does get boring eventually when you try to strain your budget by opting for food on the go through cutting spending elsewhere. Long story short, through trial and error and some pretty hilarious anecdotes saved for later, I eventually started cooking again. This did not last long though, with work taking the toll and me opting for ready made food packs most of the time.
Having moved into a new place recently, I can hear once again the calling towards cooking. I decided it would be a good idea for me to share my experiments in the kitchen on my blog, making the whole cooking ordeal something to look forward to. I do not believe in following recipes. One should have an idea of what one is doing, but go with the flow while cooking. Be creative, enjoy the process, experiment and play with the tastes and colors that nature has to offer.
The first recipe I’d like to share is something I cooked earlier today. I cooked Achari Chicken the day before yesterday and wanted to cook something vegetarian for a change. I love Paneer (Cheese) so I decided to cook Paneer Sabzi or Paneer with Vegetables. The recipe is pretty simple, and I enjoyed cooking it due to its vibrant and colorful appearance and enticing aroma. I also took some pictures to make the whole experience more visual for you.
The ingredients used are shown in the picture below. You will need a bowl of chopped paneer, 2 chopped tomatoes, chopped baby potatoes, 1 chopped onion, sliced baby corn, 2 chopped capsicums, some peas, red chili according to taste and a can of chopped tomatoes. 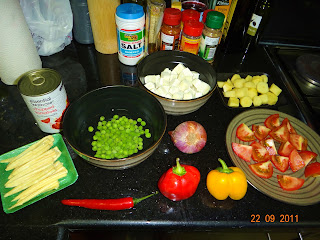 To start, take a few drops of Olive oil and heat it on a pan. Place the paneer into the pan and fry it until it is light brown. 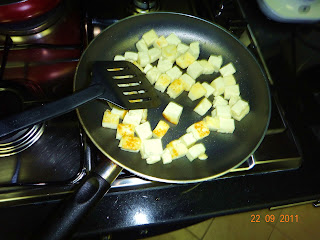 Once the Paneer is done, remove the pan from the stove. Take a karahi (wok) and place it on the stove. Add about 3 tablespoons of oil. Olive oil burns quickly so for desi cooking, it is advisable to use vegetable oil instead. Take some whole cumin seeds, and place them in the oil. Once the oil is heated, add the chopped onion. Fry until it is golden brown. In the process add a tablespoon of ginger and garlic paste, half a teaspoon of turmeric powder, half a teaspoon of coriander powder, along with salt and red chili powder according to taste. Make sure you are stirring the contents of the wok this whole time to ensure they don't burn. Add three quarters of the contents of the can of chopped tomatoes. Meanwhile put the baby potatoes to boil in another vessel. Slowly add all the other vegetables to the wok, starting with the peas, boiled baby potatoes, tomatoes, baby corn and capsicum. 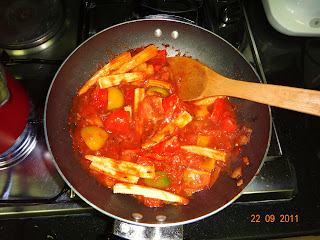 Once the vegetables are added, add the fried paneer. Stir the contents of the wok properly to ensure mixing, and add the chopped red chili. After a few minutes, place the cover on top of the wok and let all the contents simmer for a while. Once you can see mixture give off oil or drops of oil on the handi, that means the Paneer Sabzi is ready. 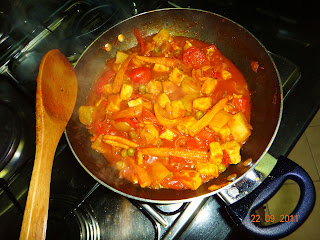 Inspect the vegetables are all properly done by poking a piece of potato to ensure they break easily. I love this dish because it is so colorful and full of different textures and tastes. 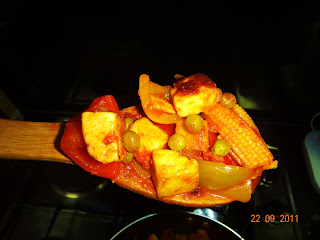 Once cooked, eat it hot preferably with a Roti. Enjoy! 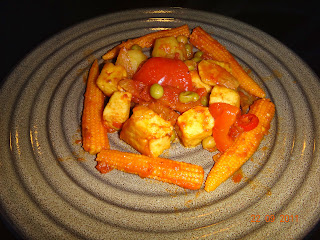