Sometimes when you stare at an illusion for long enough, it can blur the fine line between reality and imagination. Routine for me is an illusion. It can play havoc with your mind, and in such a subtle way that you don't even realize until it's too late. You start to believe that you are in control of circumstances, of your life, planning out things when actually you are just a thread in the tapestry that is being weaved by the Divine hands of the Universe. 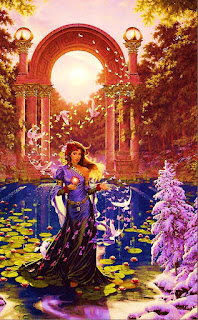 I was lulled into the hypnotic trance of routine a few days back. My routine trap was walking to work. I remember when I first started walking to my office, which is luckily very near to where I live. I would enjoy the morning air, see the people walk their dogs on the small park that comes along the way. Some women would be taking a walk with their baby cribs, gossiping away with friends. The times when the park would be covered with red and orange autumn trees, and sometimes men with blowers would come and try to clear the leaves, causing the leaves to dance around in the air until they neatly piled in one corner, promising to behave. I remember children playing in the park swings, dogs excitedly nosing around to see if they could find some treasure beneath the carpet of leaves. Then the times when it would be freezing, and the grass would be covered with a thick white cotton blanket of snow, as if to shield it from the chilly winds. The flowers than sprang up in spring, when it was full of life and people again. Walking home from work, sometimes some college students would be sitting there, working on their assignments. The small park would be the highlight of my walk, and still is. However I had gotten used to walking that way, enjoying the park and peacefully going home. Hence I was totally unprepared for what lay in store for me one fine Monday morning on 9th May 2011.

I need music to function, hence I'm always listening to something or the other. The music was blaring on full volume on my red ipod which cuts me of from the auditory part of the world for a bit. So I could not hear what was happening. I walked home and was about to turn towards my street, when I noticed a large group of people, some police personnel, and that the street was barricaded. From the barriers, I noticed that in the middle of the street there were quite a few police cars and more police personnel. Confused, I took off my headphones. That exact moment, my ears were besieged by siren calls from the police cars and ambulance. Concerned, I asked one of the policemen what had happened. When I heard his answer, a cold shiver ran up my spine. Shootings and a murder. It was as if I had been picked up from my peaceful walk and placed smack in the middle of a horror, thriller movie, where a violent criminal act had just taken place. But wait, this was my street, from where I walked twice everyday to and fro work. More sirens and another ambulance. The crowd started to grow. Dazed, I decided to walk away, shocked yet curious about the details.

Later that night, still distressed from the violent happenings, I heard over the radio what had happened. Apparently there was a murder of a young man who was suspected to be involved in a gang. It saddened me to hear the loss of a young life, and that too in such a brutal way. I was still in utter disbelief that it had happened in my area, which 'apparently' was a good, relatively safer area in West London. Sheeesh.... Life was pretty unpredictable and made sure I noted that fact too.

Now two days later, as the shock is finally wearing off, I realize how precious life is, how uncertain and just how we can start taking so much for granted. We can get lost in our lives, and not appreciate so many of the free wonders, the beauties the universe has to offer, laying bare out there if we just care to look. The Earth itself is such a gorgeous place, so loving in the way it is letting us all go about our lives and providing for our needs. A video found me yesterday, and it just reiterates my point so beautifully, using actual images to prove the magnificence. I leave you with this gorgeous timelapse video. All this is ours for free, if only we take the time to realize this dazzling, sublime fact.