The following is an article I wrote on the night of 12th January 2011, whilst waiting at the airport due to my delayed flight before THE Call came regarding mom's death around 11am. Seeing the light mood in this article actually highlights the irony of how unpredictable life can be. You could be totally fine one moment, blissfully ignorant and unaware of whats going to happen in the next. However, instead of finding this thought depressing, one can actually find solace in it. In this particular case, I was relatively happy when the bad news toppled my world. The opposite can also happen and the unpredictability paradigm can similarly hold true when one is depressed or in trouble. You could be worried and sad one moment, yet unaware that maybe the morning will bring some lovely surprise to cheer you up and wipe out your worries. That's the beauty of life. The crazy roller coaster ride. 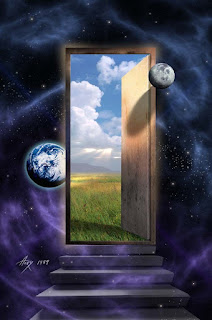 It is 4am. I am at Lahore Allama Iqbal International airport. I had a flight to London via Etihad Airways scheduled for 3:45am. However the flight is now delayed. Not by just a few hours. No, of course not. That would be too convenient. The flight has been delayed by a full ten hours, thanks to the notorious Lahori fog. Although honestly, I guess I am not complaining. It’s probably for the best. Getting to the airport from my place usually takes around half an hour. Today however, was a very confused drive, mostly in circles, blindly making guesses about our whereabouts as dense thick fog obscured our vision until finally, and may I add very luckily, we reached our destination after 2 whole hours.
The fog is too dense to turn back. And it will surely stay until at least 9am, so I opted sanely to wait at the airport. Getting here was dangerous enough. One must not tempt fate.
Luckily there is a PIA flight to London scheduled to fly around 8am. And I must say the Etihad Airways staff has been extremely accommodating, and helped me to transfer my ticket to PIA instead. There is a however a catch. I am now going to have a bit of a wait at Karachi airport. If only it was a direct PIA flight, considering the long hours waiting spent already here, life would have been SO much easier. Oh well. Beggars can’t be choosers.
One would assume I’m getting bored here. After all, it is 4am on a weekday. Everyone in Pakistan would be happily dozing away. International calls are out of the question right now due to my firm resolve to finish all my phone credit before leaving the country. However, the scenario here is not dull. It is actually turning out to be quite entertaining. Amusing even. For here as I sit by Gate 22 at Lahore Allama Iqbal International airport, on 12th January 2011, there is a very loud protest going on within my eye view!
Now an airport and that too the departure gate area past all the security checks would be the very last place in my mind where I ever fathomed I’d witness a protest. And a very loud and energetic one to that... Apparently an Airblue flight to Dubai has been either delayed or canceled, causing a large crowd of disgruntled passengers to shout ‘Shame Shame Air Blue’.
Obviously one would assume the poor passengers are in a bit of a plight, and hence they have every right to express their dissatisfaction. However as I see and observe them, all of the protesters being men and no women in view, some do appear angry but many are smiling and have mischievous trouble making expressions on their faces.
After around ten minutes of observation, my curiosity gets the better of me and I ask one of the airport staff what the scenario is. I had assumed correct. The flight had been canceled. And the woman answering my question looked straight at me, and literally pointed out the very thing on my mind, and probably on the minds of the other observers (in other words everyone) who had been watching the drama unfold. The fog was so staggeringly dense that every flight that night had been canceled or delayed. It was a precautionary measure taken to ensure the safety of the passengers. Airblue hadn’t singled out that particular flight to cancel for the sake of some airport drama. The protesters needed to just head outside to realize that, and take a look at the opaque blurry fog which cocoons around you, greedily obstructing your vision until it is all you can see. Then why the drama?
An announcement is made. The Airblue flight is canceled and its passengers politely but firmly told to turn to the ‘CA counter’. After a bit of a murmur, I watch the crowd start to disperse. The clock says 5:00am. It is amazing how quickly time flies when your attention is diverted. I hope the passengers get their concerns sorted out, provided they are justified. One thing I am sure of though, and that is that they have given everyone here a story to tell, and a great diversion from watching the clock tick away the minutes.
The protest starts again. I can’t see the crowd but I can vaguely hear the shouts again. Seems like it’s going to be an eventful stay at the otherwise not so eventful Lahore Allama Iqbal Airport tonight. I feel for Airblue...
Posted by Amna at 4:12 PM