This article has also been published on the Express Tribune website:
http://blogs.tribune.com.pk/story/6545/urdu-vs-english-are-we-ashamed-of-our-language/

We Pakistanis have been brought up speaking our national language Urdu and also English. Instead of conversing in Urdu, most of us lapse into English whilst having everyday conversation. Even people who do not speak English very well try their best to say a sentence or two, considering it pertinent for their acceptance in the ‘cooler’ crowd. 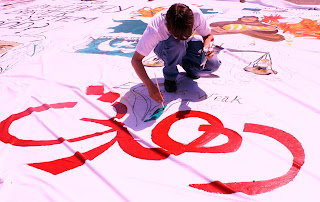 I wonder where the trend started, but unknowingly, unconsciously, somehow or the other we all get sucked into the trap. So the days go by in sheer ignorance. It was only until a college trip a few years back to Turkey that I realized the misgivings of our innocent jabber.
A group of students of the LUMS Cultural Society trip went to Istanbul, Turkey to mark the 100th Anniversary of the famous Sufi poet Rumi. One day we were exploring the city when we stopped at a café for lunch. The waiter took our orders, and continued to hover around our table during the meal. We barely noticed him until he came with the bill, and asked us where we were from.
Pakistan, we mutually answered. The waiter looked surprised, and then questioned whether we had been brought up in England. We answered in the negative, telling him how Pakistan was where we all had grown up and spent out lives. The waiter genuinely looked perplexed now. Finally he blurted out, ‘Then why don’t you speak in Pakistani language?’
The waiter went on to explain how Turkey, particularly Istanbul was a hot tourist location, luring millions of people of different nationalities from across the globe. However, when the Dutch would come visit, they would speak Dutch. When the French would come, they would speak French. When the Chinese would come visit, they would speak Chinese. Similarly everyone in Turkey spoke Turkish. He claimed he was very proud of his language and culture and failed to understand how someone would not speak the language of their country and choose instead foreign linguistics.
There were around 10 of us there, and we were all at a loss of an answer. We had never thought of it that way. It was just something that you took up because it was in the society. Even when people speak in Urdu, they tend to include a lot of English words in their sentences. Why is that? Is it because we are not proud of our national language? I am sure all of us are aware of how beautiful Urdu is, the poetry, grace and rhythm of our language is exceptional.
One excuse that springs to mind is the concept of ‘westernization’ due to the increased pace of globalization in todays world. Globalization is a factor, and yet the Japanese still speak Japanese, the Thai still speak Thai, the Greeks still speak Greek. China, a powerhouse on the global economic front, despite its many factories and western products production still speaks Chinese. In fact when the Chinese Olympics were held in 2008, the Chinese government actually had to ask its Chinese public to learn a few basic English words to help welcome the world.
I respect how these countries value their sense of identity, culture and language. I was deeply ashamed of what image I was unknowingly portraying of my country. I am very proud of Pakistan and Urdu, as I am sure you all are. No matter the problems, it is still our identity. I understand the irony of this article, since it is written in English. However, it is one way to reach those people who may unconsciously be making the same mistake as I was.
When living in the UK or traveling abroad, I make sure I use Urdu to converse with fellow Pakistanis. At home, I am also trying, though it is admittedly difficult since apparently there is a weird and honestly ‘sad’ association of how ‘cool’, well brought-up and educated a person is with the amount of English he or she speaks. I write this article because it is high time we break such ignorant patterns in our society. Urdu is a beautiful and graceful language and we owe our country the respect it deserves by speaking and portraying our true roots. Kiya khayal hai?
Posted by Amna at 2:52 PM