On 16th January 2012, TIME Magazine featured a cover story on Karachi, terming it as 'Pakistan's Dark Heart'. Upon reading it, one is given the impression of a city torn in civil war, instability and on the way to destruction. If I had never been to Karachi, or did not have good friends living there, upon reading this article I would perceive it to be a highly dangerous, volatile place on Earth, where the fashionable thing to own is weapons. 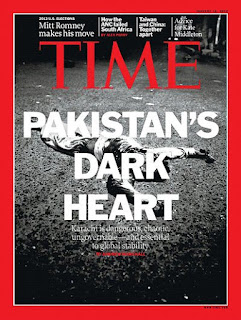 Karachi is definitely facing some problems, but the impression portrayed to the world by TIME magazine is highly negative and one-sided. I am a Pakistani, and I will obviously have many reasons and justifications on why Karachi and Pakistan as a whole is not the dangerous state portrayed by the story. However, to make the argument more balanced, I will instead give examples of what Non-Pakistani's have to say about this particular story.

The following is a letter written to TIME Magazine by an Australian in rebuttal to the article. I came across it via my brother on Facebook.

I recently returned from a charitable trip to Pakistan, whereby I visited both Karachi and Islamabad. I spoke with several universities, key businesses, prominent business leaders and several religious people from all generations….

On the day I returned to the office, someone had placed your magazine (January 16, 2012), on my desk. I read with interest your article on Karachi and the city in doom. For a person to have just returned from the very same place that your magazine described was somewhat bizarre, so I read with great detail your writer (Andrew Marshall’s) account.

Let me begin by saying that I often flick through your magazine and find the articles of great interest, but on this particular day and this particular article, I found certain comments to be both one sided and indeed very negative. I say that because I saw a different Pakistan to what was portrayed in your article. I do not and will not comment on the political or religious problems that the country faces, but I will go so far as to say that not everything is as bad as the image that your magazine paints.

Sure there are deaths in the cities. Please show me a city in the world that is free from political fighting and unrest.

Sure the innocent are suffering. Please show me a country in the world where wealth and power is equal and the innocent don’t suffer.

Sure corruption is in Pakistan. Please show me a country in the world that is corruption free.

My list could go on, but my point is that Pakistan does have problems…but so does every other country in the world in some way or another. However, in the case of ALL other nations, there are often good things to report and the media goes out of its way to promote these good things across the globe, whenever possible. The ridiculous amount of shootings in the USA is balanced off by the success of Google, Microsoft and Apple. The financial dilemmas of Greece are lost in the marketing of the Greek Islands as a holiday destination of choice. The child slave industry of India, is brushed under the carpet in favour of the nation’s growth in the global software boom. What I am trying to say, is that someone needs to look further into Pakistan and see that there are millions of great stories to write about, which would portray the country in a different light, to that what is being portrayed by your article.

When I was in Pakistan, I visited a towel manufacturing company (Alkaram Towels). They produced some $60million in export in 2011 and are aiming at $85million in 2012. A substantial increase in sales…in a recession I would remind you. The company was started by the current Chairman, Mr. Mehtab Chawla, at the tender age of nine, after his father passed away. Today the very man employs 3000 staff. Now that’s a story.

I visited universities of NED, Hamdard, Karachi, Szabist and NUST. The students are unbelievably intelligent. They spend their spare time developing APPS for android and apple. They are involved in cutting edge technology and no one in the world knows this. Why not send a reporter to Pakistan to look into this. Why not research good things in this nation, rather than just the bad things. At NUST (National Institution for Science and Technology – Islamabad)) there were 38,000 applications for medicine. There are only 83 seats for the medicine course on offer. The competition is unbelievable. In short it pushes the best to be even better. But the world doesn’t know this. Why? Because no one wants to report on it, or no one knows about it…or both!!

Please do not get me wrong. I understand that news is news, but it is high time that the western world stopped promoting these terrorists and political wars in Pakistan and started to write something that would help the nation. Something positive. If we really care about global partnerships and economic growth, then I suggest we try and give Pakistan a helping hand. There are 180 million people in Pakistan, 65% are under the age of 25. The youth of Pakistan is its strength.. it is like a sleeping giant. If you think that India is a booming nation. I suggest you stop a second and look at Pakistan. Given a little help from the western world, Pakistan can become a dominant economy. She doesn’t want aid and she doesn’t need money… she just wants the chance to be seen in a different light. I believe we have a fundamental obligation to assist. The only question is, who will reach out first.

Tony Lazaro
Managing Director
Rising Stars Management Group
Tel: 02 8824 7000
Fax: 02 8824 7766. '
I did double check before posting and yes there is a Tony Lazaro of Rising Stars Management Group who wrote this letter.
Another rebuttal I would like to share is that of a Sikh who came to visit Pakistan recently. The whole article is published in the Asian Journal here. I am going to copy paste the important lines below:

'The trip, which started on a positive note, was however dampened when I stopped to pick up a copy of Time magazine at the airport with the lead story about Pakistan titled: “Pakistan’s Dark Heart.” It is these perspectives that I wanted to escape after being so bombarded with negative sensational stories about Pakistan in the West and India. Also, the constant warnings here in British Columbia that Sikhs are not safe in Pakistan, that I should not travel with a Sikh and that I am crazy to travel there added to my panic.

But once in Pakistan, I found the opposite to be true. This piece illuminates, not the dark heart of Pakistan, but the kind, generous and sincere hearts of the Pakistani people in general and the respectful treatment of Muslims towards Sikhs and Sikh shrines in particular.

IN closing, I did not see the dark heart of Pakistan. I did not see a fanatical, irrational and violent Pakistani people, attributes that continue to be generalized to the entire Pakistan community and nation. On the contrary, on this trip, I saw a deeply spirited, non-pretentious and kind people.'


Videos on youtube have also sprung up by foreigners who have actually seen Karachi and Pakistan against the one sided article by TIME Magazine such as the one found here.


If you want to read a copy of the article published in TIME Magazine, a copy was also published on this site since I do not subscribe to TIME Magazine.

'Indeed, the Pakistan that is barely documented in the West – and that I have come to know and love – is a wonderful, warm and fabulously hospitable country. And every writer who (unlike Hitchens), has ventured out of the prism of received opinion and the suffocating five-star hotels, has ended up celebrating rather than denigrating Pakistan.

A profile of Karachi – Pakistan’s largest city and commercial capital – in Time magazine earlier this year revealed that more than 1,000 people died in 2011 in street battles fought between heavily armed supporters of the city’s main political parties.

But isn’t it time we acknowledged our own responsibility for some of this chaos? In recent years, the Nato occupation of Afghanistan has dragged Pakistan towards civil war. Consider this: suicide bombings were unknown in Pakistan before Osama bin Laden’s attack on the Twin Towers in September 2001. Immediately afterwards, President Bush rang President Musharraf and threatened to “bomb Pakistan into the stone age” if Musharraf refused to co-operate in the so-called War on Terror.

Many write of how dangerous Pakistan has become. More remarkable, by far, is how safe it remains, thanks to the strength and good humour of its people.

...the Daily Mirror had the inspired idea of sending Botham’s mother-in-law Jan Waller to Pakistan – all expenses paid – to see what she made of the country.

“The country and its people have absolutely blown me away,” said the 68-year-old grandmother. After a trip round Lahore’s old town she said: “I could not have imagined seeing some of the sights I have seen today. They were indefinable and left me feeling totally humbled and totally privileged.” She concluded: “All I would say is: ‘Mothers-in-law of the world, unite and go to Pakistan. Because you’ll love it’. Honestly!”

Mrs Waller is telling the truth. And if you don’t believe me, please visit and find out for yourself.'
I will like to end this article by mentioning the last example, of an American who lived in Lahore and claims 'Pakistan saved my life.'
'About a year and a half ago, I made the decision to move to Pakistan.  Since then, perhaps the most popular question my local friends ask is, “Were you scared to come to Pakistan, because you thought we were all terrorists like the Western media portrays us?”
Honestly, no, I was not, and I did not.  Even before coming to Pakistan, I found the notion that all 180 million people residing in Pakistan, the sixth most populous nation in the world, were terrorists or had extremist tendencies completely ridiculous.  I figured that, as in every country, Pakistan had people from all walks of life with different creeds, hopes and dreams, opinions, and lifestyles.

So, to answer my friends’ questions: No.  I cannot readily and honestly answer that coming to Pakistan drastically changed my opinion of the country—you see, it was never negative in the first place.'
Posted by Amna at 4:51 AM